Food cravings are not just in your head…they start in your gut.

Food Cravings Start in Your Gut 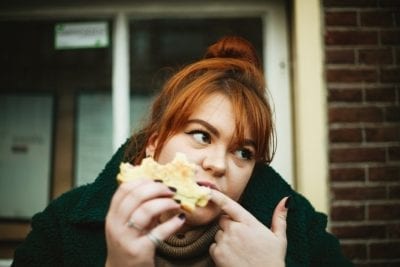 Your gut microbes tell your brain what foods your body “needs” by suppressing or increasing cravings.

Since gut bacteria feed on whatever their host animal eats if you have disrupted or pathogenic gut bacteria living inside you. Your unhealthy gut bacteria tell your brain to feed them more foods that help them thrive and ferment.

Have you ever eaten a food that didn’t make you feel good, but still craved it anyways?

Unhealthy gut bacteria often crave foods we are intolerant to. These are foods that serve as a feast for pathogenic bacteria.  Be it cheese, ice cream, sweeteners in diet sodas, or corn syrup solids in protein bars.

Here are 5 things you need to know about the link between food cravings and gut bacteria:

1. The brain-gut connection tells you what to eat.

Your vagus nerve—the nerve that governs your digestion and how you think and make decisions—is directly connected from the frontal lobe of your brain to the top of your gut. You also have 400 times more serotonin, as well as 50% of your total dopamine production in your gut compared to your brain (1). These two chemicals associated with “good feelings.”

Consequently, your gut microbes can affect your mood, behavior and insatiable cravings. Particularly, for foods that send “feel good” signals to your brain (like sugar, chemically infused processed foods). Even if, they don’t make you feel good physically.

2. Certain bacteria tell us whether we are “deficient” or “sufficient” in certain nutrients, consequently influencing our cravings.

A study of flies with unhealthy gut microbiomes found that when one group was given healthy gut bacteria (Lactobacillus plantarum, L. brevis, Acetobacter pomorum, Commensalibacter intestini and Enterococcus faecalis) the flies completely lost the urge and cravings to eat foods that fed unhealthy, pathogenic bacteria.

The microbes people in Japan are especially good at digesting seaweed. But are horrible at digesting dairy, whereas people from cultures like the Nuer of the upper Nile or the Todas in Southern India drink raw milk like water, no problem (3).

4. Foods we insatiably crave encourage the overgrowth of bacteria that crave more of these same foods.

Higher growth rates of bacteria in the small intestine, more hungry bacteria craving more of these foods and cravings that “won’t go away” (4-7). 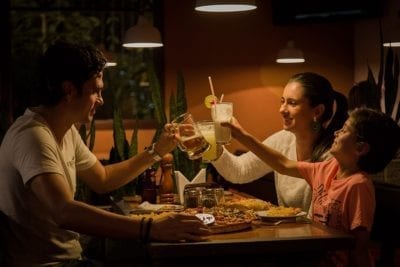 Typically, most people don’t “crave” chicken during that 3 p.m. “slump,” or broccoli every night at 10 pm after dinner. At least to the degree of overeating them or eating them when they are not hungry. Why? These foods are satiating and our body has a wonderful “built in” signal for telling us when it’s full and hungry for real foods (if we listen).

Cookies, cheese, popcorn, Ben & Jerry’s, pizza, Chinese food, chocolate on the other hand? It may be an overgrowth of microbes speaking not food cravings.

5. Food additives signal to our brain “feed me.”

Certain foods and food products contain chemicals that not only alter our gut microbiome, but also our neurotransmitters—a byproduct of our gut microbiome. Exhibit A: Cheese. Cheese contains casein and casein fragments called casomorphins. This is a casein-derived morphine-like compound with opiate (drug-like) molecules built in.

When consumed, these fragments attach to the same brain receptors that heroin and other narcotics attach to.

Interestingly, our brain’s ‘reward center’ releases dopamine when we eat salty foods like cheese in order to encourage us to eat more of it. (Remember: more than 50% of your dopamine is produced in your gut). The same thing happens with foods like Dorito’s, French fries, sugar and even “diet” foods like diet soda, sugar-free ice cream and processed food bars (8, 9).

In general, NOT all food cravings mean your gut is unhealthy. However, if you find that you are continually craving the same foods over and over or can’t stop thinking about certain foods, it’s your body’s way of signaling to you, (a). “I am under-nourished or not absorbing the foods you are eating!”; and/or (b.) “Feed your gut bacteria _________ (food they are craving)!”